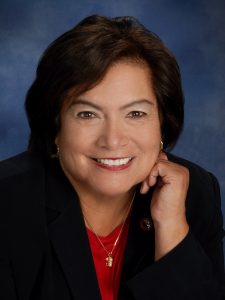 Erlinda previously served as vice president for student services/assistant superintendent at Cerritos College, administrative dean and dean of students at Mission College in the bay area, and as director of student affairs at El Camino College in Torrance before that. She was also an Educational Community worker for the Los Angeles Superintendent of Schools.

In addition to the MedFit Education Foundation Board, Erlinda currently serves on the Santa Ana Workforce Investment Board, and the KidWorks Board of Directors. She is a member and mentor for the Association of California Community College, and an administrator and a member of the Executive Board of NACCTEP (National Association of Community College Teacher Education Programs). She has served in leadership roles for the National Council of Student Development, Hispanic Association of Colleges and Universities (HACU), and the Board of Governors for City University of Seattle in Washington.

Erlinda has been recognized for professional and civic contributions by the National Council on Student Development, the National Hispanic Business Women’s Association, the Greater Lakewood Chamber of Commerce, and the Santa Ana Kiwanis.  Most recently, she was named Educational Leader by the Hispanic Education Endowment Fund (HEEF), Woman of the Year of the 69th District by Assembly Member Tom Daly, Person of the Year by the Santa Ana Chamber, and honored by the City Council of Santa Ana. She has participated in the US Department of Education’s Evidence – Action – Innovation: A College Completion Symposium in Washington DC, as one of 26 practitioners selected nationally, and one of two community college executives to participate in this White House appointed endeavor.

Erlinda is a sought after speaker and panelist. She has spoken at the CCLC Asilomar Leadership Seminar, Kaleidoscope Leadership Program and ACE Fellows Seminar.  She has served on several ACCJC accreditation evaluation teams and as chair multiple times, and accepted special assignments as requested by the Commission.