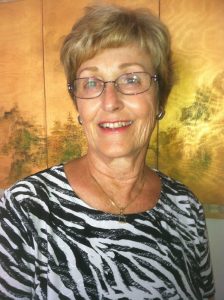 Barbara Mathew brings decades of diverse experience to the Medical Fitness Education Foundation.  She has served the non-profit sector as a successful volunteer for numerous organizations over a span of 26 years.

Barbara served four years as an elected school board member in Tiburon California.  Another four years was spent on the board of the United States Tennis association of Northern California.  She spent 15 years as a member of the Tiburon Peninsula Foundation and as its president for three years while accomplishing a number of important community projects. Seven years was spent being president of 5 different Parent/School associations ranging from Belvedere Nursery School to the Marin Academy Parents association.  During these years, she developed and evaluated educational programs, hired staff for projects and raised funds to support a variety of projects and programs.

She spent another 6 years being president of The Boyd Natural History Museum, The S. F Bay Chapter of the Oceanic Society, The Tiburon Peninsula Club and the Tennis Club Management Association.  Each responsibility gave Barbara vast experience in working successfully with other volunteers to accomplish common goals.

As Barbara was transitioning out of non-profit volunteer commitments, she entered the recreation and fitness business.   She spent 11 years managing the Tiburon Peninsula Club (a 700 family, member-owned non-profit facility) in Tiburon, California.  During this period, she worked closely with the Town of Tiburon to create a freshwater marsh out of club property to alleviate annual flooding in the downtown area. (donating 3 acres of club property to the town). She developed and coordinated a three- million-dollar master plan project that was finally accomplished after she left.  Barbara brought fitness to the TPC by building a 2100 sq. ft. facility and purchasing appropriate equipment. She accomplished major property and facility improvements as well as re-landscaping a large portion of the remaining 11-acre property.

During the next 16 years, Barbara worked for California Clubs of Distinction, the Trade Association of Health, Racquet and Fitness Clubs in California. (the IHRSA Regional). For 15 years she has published their quarterly 28 page 4-color trade journal—selling the advertising; procuring the articles; doing the mailing list plus the layout.  She and the executive director are recognized as the face of the Association of Independent Clubs in California.

What did she do for fun you may be wondering?  In her spare time, Barbara has raised, trained, shownand bred Arabian Horses.  She has hauled her daughter and the horses from Red Bluff to Santa Barbara for a number of years.  She rode in endurance and did competitive trail competitions.  Her daughter now has the third generation of her breeding program.